Social Media: the good, the bad and that's how it is

January 08, 2018
We've all had that moment when the list of everything that we have to complete that day is buzzing around our head, but it's OK because it's only...MIDDAY? How did that happen? Then, we look into the palm of our hand and see our fingers scrolling through post after post on Facebook. Most of which we've already seen or read but we may as well waste more time and read it again, right? This activity is definitely more common in younger people, but I am certainly not accepting that this only happens to people born after 1994. Yes, the social media bug has sifted its way through generations and even my Grandad 'loves' posts on Facebook and knows about my graduation before I've rang him to have the old fashioned conversation.

I'm not saying that my Grandad and others in their seventies and eighties reach for their phone to see updates first thing and that it's the last thing they see before going to sleep at night, but it is contagious and it's definitely catching.

You always hear negatives surrounding social media and how bad it is for kids. Yes, there are so many dangerous issues that come with this media platform but I think that it brings good to the world as well.

I understand that children who are far too young have access to things that would never have been accessible back in 1970 when playing outdoors in the mud was all kids did. I get that it leads to cyber-bullying and depression in young people because they can see conversations between friends that they'd never have seen before. The bullies can hide behind screens and write nasty messages that they'd be too cowardly to say in person. People who suffer conditions such as eating disorders can read hurtful comments from people who don't know but feel they need to voice their unbalanced and uninformed opinion all over the internet. They have access to profiles of people with similar illnesses who feel they're trying to help but are making a bad situation worse by highlighting calorie counting and feeling good after starving yourself for three days.

It removes the need for face-to-face conversation because it's easier to type out a message and not have to immediately respond. There is a huge lack of emotional connection and some young people are finding it more and more difficult to effectively communicate nowadays because often they go for hours, days, weeks without saying a word, only through social media do they talk to people. It almost removes the humanity from our veins, talking like robots through machines, getting rid of emotion and closeness, being so blunt and misreading messages that are intended on being conveyed differently.

Taking all of the above on board but flipping it around, there are also many benefits that social media brings to the world. It creates a huge space for marketing and networking and is used by businesses everywhere for promotion. Companies can source masses of traffic and increase the awareness about themselves by boosting posts on Facebook, creating advertisements and targeting the correct audience for what they are trying to publicize.

Not only for business though, social media can also be beneficial on a personal level. I often find myself chuckling away at the upbeat memes and sayings plastered over my newsfeed. I often find myself smiling at lovely pictures of friends that I haven't seen for a while but are doing great. People that I've met on travels around the world and find it's impossible to stay in constant contact with yet I feel like we do virtually through 'likes' and comments on posts, always knowing roughly what each other are up to. When I was visiting places as far away as New Zealand for a few months, Facebook and Instagram allowed me to instantly show my loved ones that I was having a great time and was, most importantly, safe. So many families are separated nowadays due to all living in different countries and social media can bring them closer and keep them in touch too. You'd never have had that thirty years ago.

So for all its faults, there is a lot of good that comes with this thing we call social media. As long as we are careful and continue to stop some of the awful things that can occur because of its bad points, we have to accept that nowadays it is simply a part of our existence and will continue to be that way until something more wacky is invented.
Thoughts

Popular posts from this blog

"Now to do what I do best, drink 4 bottles of Chablis and flash my freckly bangers" - The Windsor's 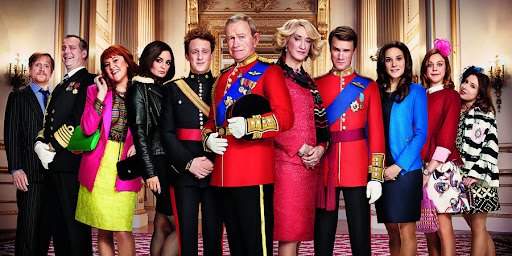 The Windsor's - a hilariously inappropriate television series. It is a comedic and exaggerated representation of the younger generations (I don't think they dared include HM The Queen) of the Royal Family and one that I would highly recommend.

I was first told to watch the series by my Dad who, after observing a discussion between my sister and I about our futures, strongly felt that we were Beatrice and Eugenie, no question. On the show, these two represent every aspect of the typical 'living off daddy' type. The Verruca Salt to the Royal Family and quite frankly Daddy, they unreservedly do want another pony. Played by Ellie White and Celeste Dring, the two have constant wild and fluffy plans for their lives, coming out with questionable knowledge (dumb statements) and discovering that a full time job consists of more than three days a week for two hours each day. Oblivious to reality and having never worked a day in their lives, they bring their mad mother Fergie int…
Read more

Every person you meet and each experience you have adds to the disentanglement of life's craziness!

November 21, 2017
The phrase "life is too short" gets thrown about continuously, even meaninglessly sometimes, but recently I've noticed how much truth it contains. It might be more appropriate to say that all of these phrases are so cliche, but so very real too. It takes some people a lot longer than others to grasp these valuable tokens of wisdom and we are all always learning more about how to live and cope with life's dramas, but we all get closer through everything we experience and learn a lot from the people we encounter.

There comes a time when you become better at distinguishing what matters and what doesn't. Who matters and who doesn't. What's worth wasting time worrying about and what doesn't need to be given the time of day. And there is a time when you realise how good you're getting at it, this weird and wonderful thing we call life. I know I'm still so young but I feel I've gained a better understanding recently, though I'm fully aware th…
Read more